Welcome back to our third installment of The Mountains Are Calling, Get There Safely.  In this article, we will talk about how to become more comfortable with driving through a raging blizzard in order to get to fresh tracks or, as you’ll see soon, back from a great free concert.  Even if you avoid the raging blizzard part, you might still find yourself driving in less than ideal situations when you are behind the wheel.  If you not ready for this step, start back at the beginning of this series with Alternatives to Driving.

As you may have read in Save Some Dough – Aprés Ski or Soak, spring concerts at the top of my list on some of the best and affordable things to do in mountains.  Years ago, my buddy Paul and I found out about the Rusted Root concert in Steamboat, which at the time, they had finally released a new album called Stereo – Rodeo and we were hoping it was as good as their When I Woke album.   Stereo – Rodeo is a good follow up for Rusted Root, but unfortunately it was not the commercial success of When I Woke.  If you don’t know who they are, you should look them up.  Even today, the band puts on an occasional tour.  They put on a great live show!

If you are not familiar with the drive to Steamboat, it is a two-lane, winding highway through the middle park area of Colorado that, towards the end of the drive, capstones with the Rabbit Ears Pass which is notoriously treacherous.  What makes this pass so hard to travel is the twisty path the US 40 takes over the pass and the overall elevation change relative to nearby terrain.  Throw some moisture, wind, and some cold temperatures at this pass, the road gets quickly covered in snow, lots of snow.  To complicate further things, Joel Gratz from Open Snow explained to us it really hard to predict when significant snowfall will happen.  The reason is due to the Dopler radar locations being so far away in Cheyenne, Denver, Pueblo, and Grand Junction and the tall mountains Steamboat hide behind.  Bottom line is forecasters can’t see the moisture, so what may look like nothing is going happen turns into the most epic powder day.  Joel often refers to this challenge as the “Steamboat Surprise.”

We left under clear skies, nothing on the weather report coming out of the Denver outlets to suggest any problems and made the trek.   We arrived in Steamboat with no concern and had a fantastic time at the concert.  About midway through the show and the largest flakes I have ever seen started falling.  It quickly accumulated and by the end of the show, we had at least 8 inches at our feet.

By the way, Joel’s email list which was called Colorado Powder Forecast at the time predicted this storm and his business absolutely took off after he was the only one who had accurately predicted this particular storm.  Yes, Joel, I know, I know we should have listened to your advice and planned to stay the night.  We honestly didn’t know you had called in a 30″ powder day for us! 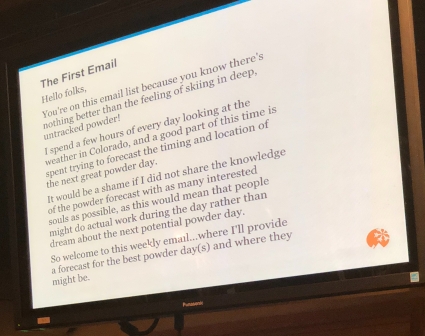 By the time we got back to the car, it was getting close to 10 at night.  We checked the roads and the pass was still open and we pressed on home.  We were able to get over the pass with not much incident but did see a truck overturned in the ditch about 10 miles down the road of the pass.  We checked to make sure no one was in it and pressed on with our journey.  An hour or two past and we pulled out the gas station in the little town of Kremmling for the final push back to Breckenridge.   Despite the continuation of the snow, I thought the roads were getting better so I sped up to get home.

It was probably about 1 am at this point, I was tired and was ready to get back home.   This section of road has rolling hills and fencing to keep wildlife off the road.  We came over one of the hills and directly in front of us was a herd of mountain sheep.   I hit the brakes turned the wheel by mistake which put me in a sideways slide heading straight for the heard.  I just happened to see a gap in the herd, hit the gas and spun the other direction and slid within inches by the heard and then corrected our slide back on the road.  While Paul was my “mad” driving skills, I was trying to get my heart out of my throat!  Thankfully we didn’t end up hitting the herd or end up in the ditch, but it made me realize a few things:

I am by no means a professional driver on the ice, I just got lucky that night and knew how to correct a slide.  These skills I learn from a driving class I took back as part of my driver’s education years ago.  If you missed this day in class or you grew up where these types of classes were not necessary, it’s not too late to pick up these skills.  You can go to your local high school parking lot with a friend and practice until you feel more confident or, better yet, we found three different companies that offer winter driving clinics.  These are:

Masterdrive has 3 locations in the front range in Colorado Springs, Denver, and Fort Collins.  In addition to traditional driving experiences, they offer a great 2 hr Winter Driving Camp which will have you in your car for a hands-on experience with getting into a skid, braking techniques, and recovering from a skid.  This program is offered between October and March and can be taken stand-alone or included in a more comprehensive driving experience.  The best way to get into a class is to call their office directly as these classes are subject to demand.

First Gear and Skid School, located just North of Denver in Brighton Colorado, offer two different classes to help you become more confident on the roads.  The first is a proactive Family Drive which teaches you the defensive skills to avoid and recover from skids.  Their other class, called Aftermath Drive, focuses you on getting your confidence back after you had an issue.  Both classes are taught year-round by using their skid car which allows them to simulate various situations in a controlled environment.

Finally, the Bridgestone Driving School is the preeminent driving school in North America.  Located in Steamboat Springs, they have a full complement of driving classes covering safety, performance, and custom classing with their First Gear though Sixth Gear training programs.  These classes operate between mid-December and Early March.  But a word of advice, book your class early as possible.  People come from all over the nation to participate in this program.  If you cant make it out, they have produced a DVD that will get you started and give you basics you can try on your own.   They also have a ton of helpful tips on their site, so check it out.

We really hope you’ll take advantage of these classes and can build confidence in driving in the snow.  Whether you are driving in the snow for the first time, getting through to catch the epic pow, or just caught by the Steamboat Surprise, its good to know you can handle the conditions whatever they through your way.   At our next session, we will talk more about the resources we use to know the road conditions before heading out.

Until next time, pray for snow and celebrate when Ullr Provides!

© 2018, UllrProvides All rights reserved.  Any use or publication of content, including photos, requires express permission.